"I just hope people enjoy my creations
as much as I enjoy making them."

Joe was born and raised in the Appalachian mountains of New Jersey where his passion for the outdoors was initially fueled.

A natural sense of design was evident from a young age. This design sense was honed through studies in both Architecture and Visual Communications.

Joe was an avid street photographer in NYC and later spun his visual art into shooting film and video of action sports and live music.

In 1989, Joe left New Jersey to pursue the freedom that Colorado offered. For years Joe worked in the snowboarding and guiding industries with construction jobs intermingled. After 2 decades in the log home industry, Joe decided to dedicate his full time to creating furniture and art using the skills that were seasoned during that time.

He now lives nestled into the Flattops of Colorado, in Sweetwater, with his wife Keri, his 2 daughters, Ella and Fara, 2 dogs, 2 cats and a variety of other critters. When they are not working on the family business, Sweetwater Trading Post, they are spending time on the river and playing in the snow. 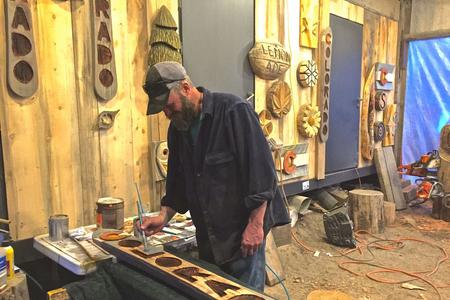 Joe draws from his many travels both domestic and abroad. Inspired by the architecture, landscapes and cultures, he channels these experiences into original designs.

Joe attributes great influences to George Ohr, the Mad Potter of Biloxi, Philip Barter, a Maine based painter, David Nash, a British sculptor and Joe’s grandfather, Veikko Huotari, a Master Gold, Silver and Coppersmith, who worked with the Georg Jensen Company in Copenhagen, Denmark, and immigrated to the US, with his family, from Finland. He created pieces for Tiffany and Co. and Cartier. Joe was surrounded in his youth by many of Veikko’s designs and they left a lasting impression.

Joe’s creations are the result of an eclectic interest ranging from classical architecture to folk art to music to film.

He enjoys playing with the juxtaposition between modern design and the natural beauty of the mountains. 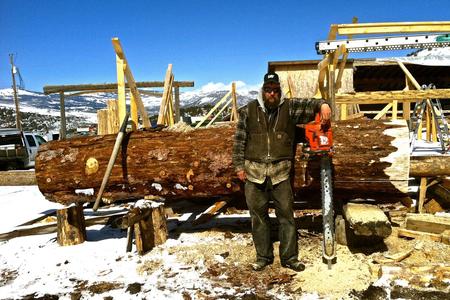 Joe’s techniques were developed over two decades of working in the log home industry. The precision required to scribe fit logs together coupled with the repetitive patterns of cutting notches have resulted in Joe’s unique and original designs.

Fire plays a major role. Joe enjoys the timeless and complex relationship between wood and fire. This transformative bond has been the subject of a lifelong fascination.

Branches are a favorite medium for Joe. He enjoys the whole process from harvesting, to stripping bark, to playing with the flow and patterns. When building branch rail, Joe realized whole new dimensions and possibilities for using this material to create furniture, mirrors, lampshades and other designs.

Finishing is a most important part of the process. Joe uses a variety of techniques, ranging from paints, stains and polyurethanes, to oils and waxes, and a favorite product called Lifetime, which is a water soluble powder that causes a rapid aging when combined with continuous exposure to water and sun, making it ideal for outdoor applications.